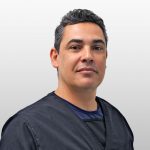 Dr Fabricio Freitas is originally from Minas Gerais, Brazil. He graduated with a Bachelour’s Degree in Dentistry from UNIVALE University in 1993, and worked as a dentist in Portugal for twelve years before moving to London in 2012.

During the period that he was working in Lisbon, he granted the Diploma of General Dentistry from Universidade de Lisboa in 2000.

He continuously improved his knowledge in the field, qualifying with the following Specialization Courses:

His main area of interest is the aesthetics, including orthodontic treatments, but his able to provide a full range of high quality treatments.
Dr Fabricio also has a delicate touch when treating his patients, and great communication skills, speaking Portuguese, English and Spanish.